NO ASHES IN THE FIRE by Darnell L. Moore 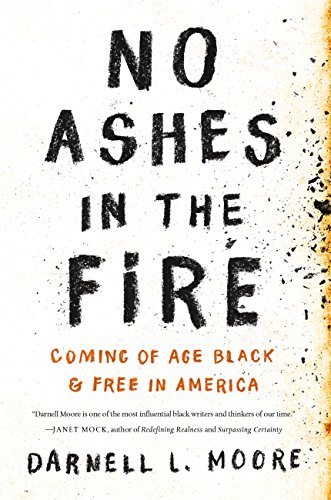 I ordered this book from the library because I saw he was coming to Newark for the book tour a couple weeks back. I wanted to go to his event, but it was the same night as my sister’s engagement dinner so I couldn’t. But a few days later it was there sitting in my library pile. Then I got an email saying it would be a book this reading group at my job would be discussing next month. So I was like, wow. That’s convenient. I’ll read it soon. THEN I got an email from the book club in Newark was going to do this book later on in the month. I was like, ok fine I’ll read it now.

It was really good. I saw in the email from my job (at SHU) that Moore went to SHU, so that raised my interest in it a lot. He was a very different type of student than I was (I always did my work because it was mentally distracting), but from the perspective of an instructor, it’s helpful to understand the logic of not doing papers or whatever. It’s easy for it to feel personal if a student isn’t trying in your class, but that’s not usually what it is.

Reading about his secret relationships was also interesting. I mean… a lot of guys are down for secret sex. A lot. I felt bad when his relationship with a really decent guy didn’t work out because Moore was keeping it a secret (the ol’ roommate routine). His reaction to telling his mom about it was so beautiful, though.

The best thing in the book for me was really the geography of it. I’ve lived in New Jersey my whole life, so it was cool to read from someone who grew up in Camden and went to SHU and lived in Elizabeth and Newark. I didn’t know much about Moore before reading his book, so I had no idea he worked with Corey Booker as the mayor of Newark. Usually the narrative about that group who was getting paid with the Zuckerberg money is pretty negative. It was nice to hear a perspective from the inside to see what it was like in real time.